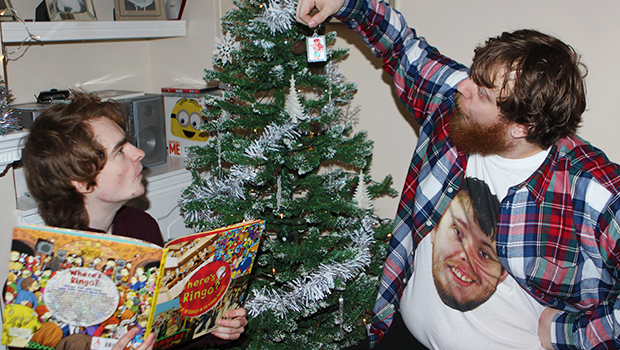 Now that we’re older, we don’t get toys for Christmas anymore. It’s all socks and stationary, but we miss having cool things to play with over the festive period. So, a few years ago we set each other a challenge to £20 worth of gifts, but each item had to be under £3. It turned out pretty badly, with us giving each other things like garden gnomes and draft excluders. However, the following year we decided we’d have a checklist of 10 things to buy. That was a much more successful idea, so we’ve continued to do it every year. Let’s take a look at what we got each other this year:

What Ben got Mike

1. Book – Cyanide & Happiness: Stab Factory
B: I got him their previous book last Christmas so it seemed an obvious choice
M: Always a safe bet, me and Ben have been fans of Cyanide and Happiness for years now, and between us I think we have all the books.

2. CD – Ringo Starr: No No Song (vinyl)
B: We’re always joking about how bad Ringo is and we both find this song hilarious
M: There’s a reason it’s called the No No Song, not because those are the lyrics, but because that’s what you say when you hear it.

3. DVD – Space Jam
B: I honestly couldn’t remember if Mike loved or hated this film
M: This is something of a joke between me and Ben, one day we decided to watch a film and after many minutes of discussion, we chose one of the worst atrocities ever committed to celluloid, Space Jam. Now I’m the proud owner of said movie on DVD.

4. Game – Wii Sports Island
B: We’ve got lots of Wii games like this that we enjoy playing
M: We do love our Wii games, and this is the sort of thing we love, multiplayer sports games.

5. Food Related – Reese’s Pieces
B: Mike’s favourite chocolate
M: One of my biggest weaknesses, Reese’s Peanut Butter Cups. I like pretty much anything by Reese’s, but the Peanut Butter Cups were what started my love affair with them.

6. Clothing – Pith helmet
B: I’ll be honest, I wanted this because it just seemed so cool, but I couldn’t justify buying it so I got it for Mike instead
M: I think Ben wasn’t keen on this as a present for me, but I like it. I’ll find a reason to wear it at some point.

7. Just For Christmas – LED Penguin
B: Mike likes penguins
M: My favourite animal, Penguins. Can’t explain why, I just love them. They endure so much suffering and they’re still hilarious to look at, all sliding around. Anyway this one lights up, so it’s better.

8. Personalised – T-shirt with Mike’s face on it!
B: I laughed uncontrollably for about 20 minutes when I thought up this one
M: It was quite a shock when I unwrapped a present and saw my big ugly face grinning back at me. Quite a shock indeed.

9. Wildcard 1 – Colour Changing Candles
B: We have these in my house and Mike enjoyed them so much that I thought I’d get him some of his own
M: Hours of entertainment with these colour changing electronic candles. I was first entranced by them at Ben’s house when he had a few on his fire place. They’re great for setting the mood of a room.

10. Wildcard 2 – Disney Pin-up Princess Keyring
B: I can’t remember why I thought this was a good present to be honest… seemed funny at the time
M: When Ben asked me who my favourite Disney Princess was, I was expecting maybe a doll or something, I wasn’t expecting some raunchy key rings featuring Disney Princesses.

What Mike got Ben 1. Book – The Tommy Cooper Joke Book / Where’s Ringo
M: Saw Where’s Ringo and thought it was perfect, because Ringo is something of a running joke between me and Ben, then I forgot I’d bought it for him and got him a Tommy Cooper book.
B: He cheated! He got me two! I do love Tommy Cooper though and we both have a weird obsession with Ringo – hence the vinyl I got Mike.

2. CD – Toy Story Soundtrack
M: I’ve told Ben many times that, as a child, I had two cassettes that I always listened to, one of them was Mr. Blobby by Mr. Blobby, and the other was the Toy Story soundtrack, so when I saw it in BHS I thought it would make for a nice present.
B: I love Toy Story – and pretty much all Pixar films – and I like listening to the music of Randy Newman, so this is a great present.

3. DVD – Another Audience With Ken Dodd
M: When me and Ben went to see Ken Dodd live I didn’t think we’d ever make it out. To this day we still joke about it, and when I saw this DVD I just had to get it.
B: Not content with spending 5 hours of our lives watching him live, Mike has graciously allowed me another 90 minutes with the comedian!

4. Game – Wii Resort + Remote
M: Ben bought Wii Sports Resort a while ago and it turned out we needed a Wii Plus remote to play it. I had one and so had a go at home, and I thought it was such a good game that it was a shame for Ben not to be able to play it, so I had to do something about that.
B: I was very disappointed when I couldn’t play this before because it looked quite good, so now I’m happy we get to play it!

5. Food (and drink) Related – Loch Ness Coaster
M: I thought there was a practical gift section, so I bought this, when I found out there wasn’t I shoved it into the food category. It’s the most random thing I could find, a coaster from Edinburgh with a photo of Loch Ness and Japanese writing on it.
B: This made me so bemused. I kind of love it though because it represents how people will try to merchandise anything.

6. Clothing – Waistcoat
M: I wanted to get Ben something he’d actually wear for Christmas, and I know he loves his waistcoats so wanted to get him one. Managed to find one after days of looking, but it turned out to be the wrong size, so it was less of a waistcoat and more of a waste of time. GEDDIT?!
B: I do love my waistcoats and I was so excited when I saw this Butlins style one, but sadly he got me two sizes too big so we have to return it.

8. Personalised – Gush Quote on Canvas
M: Wanted to make one of those inspirational pictures with a picture of the sun setting over a lake and something stupid written on it, so I used a quote from our good friend Gush.
B: Our friend Gush comes out with some great lines, and we laughed about this one so much. One day he just randomly asked us “What’s an anteater called?” when we told him it was called an anteater, he said “Is it not called an Aardvark?” Whenever I’m feeling sad, I will look at this and it will make me smile.

9. Wildcard 1 – Beatles 1 CD/DVD
M: Originally this was both Ben’s CD and DVD present, but then thought that I wasn’t putting much thought into that present. In the end I was able to still give it to him but as a Wildcard present, turned out he really liked it.
B: I love the Beatles and really wanted to get this when it came out but forgot about it. I had the CD on cassette when I was young but it broke so I’m glad I can listen to it again and cannot wait to watch the DVD.

10. Wildcard 2 – Spring
M: Bought this for Ben about a year or so ago, but had misplaced it. I since found it in with my Christmas decorations, so I convinced Ben to add a second Wildcard category.
B: What can I say, the man knows I love my springs. I’ve been playing with these since college days – they help me think and prevent boredom.