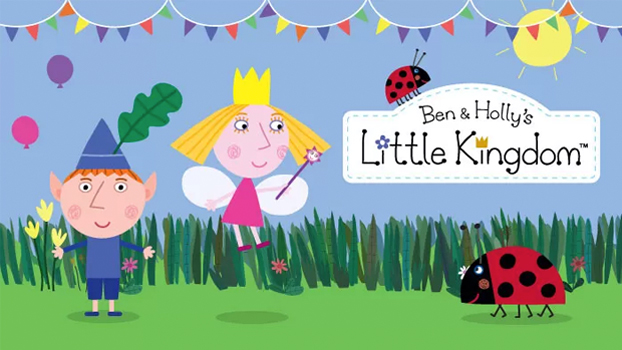 So this morning I woke up at 5:00 and couldn’t get back to sleep. I listened to some music for a while, but soon decided to get up and watch some TV. This was when I indulged in one of our favourite pastimes… Children’s television!

Ben and Holly’s Little Kingdom caught my eye because it had my name in it. Simple as. It was on Channel 5’s Milkshake, so I wasn’t really the target audience but that didn’t cross my mind. Milkshake is an odd show. It’s really childish, with drawings in the background and enthusiastically simple presenters. Sometimes the presenters are nice and fun, but mostly they’re just god awful.

What first made me smile about the cartoon was the voices. All the characters had typical silly cartoon voices that nobody would ever really talk like… Except for one. The chef, or Nanny Plum as she’s known, sounded like a primary school teacher with no voice training had been called in at the last minute. It kind of made it feel like you could relate to the character, despite the fact she was more of a background character. The voice of Ben was unfortunately not a bit like mine, nor was the voice of Holly anything like my friend Holly’s voice. Although they did get our hair colours right – ginger and blonde respectively.

Another impressive feature was the comic timing. Normally I wouldn’t expect much from a kids’ cartoon in terms of humour, not because kids don’t like humour, but because the writers usually add awful jokes in that I’m sure even the children don’t laugh at. But there was one joke that stood out where the man spoke to the queen on the phone and told her he didn’t want to go to dinner because they had the best cook in the world, so the queen invited herself over to the man’s house. But the funny bit was where he just said ‘okay’, put the phone down, walked over to his seat quite bemused while his family stared at him, sat down and said “I’ve got good news and bad news…” Which made me laugh and it was nicely played out.

The story was quite simple. The main plot being that the cook was worried she couldn’t cook something suitable for the king and queen. As it turned out, Ben and Holly found a ‘magic’ book in the library and she cooked an ‘invisible soup’, but then it turned out the king really liked the cook’s stew. Although the episode was only 15 minutes long, the lead characters only appeared (together) 5 minutes into it, however this didn’t really affect it. In fact I rather liked it, because it felt like the focus wasn’t going to be on them every minute of every episode. It’s given me an idea for a show where the titular characters only have brief cameos in each episode.

So in conclusion, Ben and Holly’s Little Kingdom show renewed my faith in Saturday morning television, which I always used to love but has since been spoilt with rubbish cartoons on CBBC and CITV. It also made me understand why Mike likes watching Kids TV